Sustainability is an important value for us. This is why we want to offer boat-owners and manufacturers a possibility to change to electric propulsion. "Kräutler Electric Motors" from Austria produces high quality electric boat engines since almost 40 years and has gained trust from private and commercial customers worldwide. With a range from 0,8 kW up to 120 kW we offer solutions for both sailing- and motor vessels. Together with our partnering companies, we will find a full package solution, including batteries and charging systems for your boat.

The new Vendia Team has a long time business relationship with Kräutler and will assist with the installation of the engines. If you have any questions related to this topic, don`t hesitate to contact us.

Oars from Vendia in Holland

Vendia is not only good for Hulls and Interiors, also oar blades for example can be made easily from it. Light and durable, and very pretty on top of that. These blades were made from 6 mm Vendia pine planks at "de boobouwschool" in Holland, one of the oldest and best known boat building schools in Europe. Bert van Baar, one of the teachers at the school was not only happy about the look and feel of Vendia, but also loved the smell. The sliced veneers take varnish very well, as you can see in this picture. 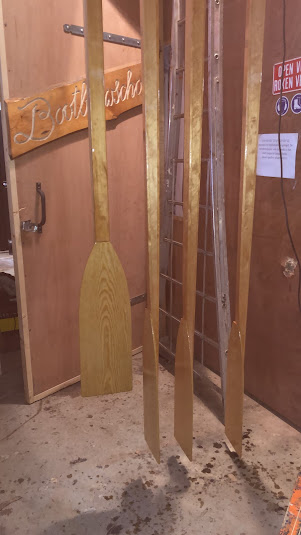 One happy Customer: Riverboats in Lapland by Seppo Köngäs 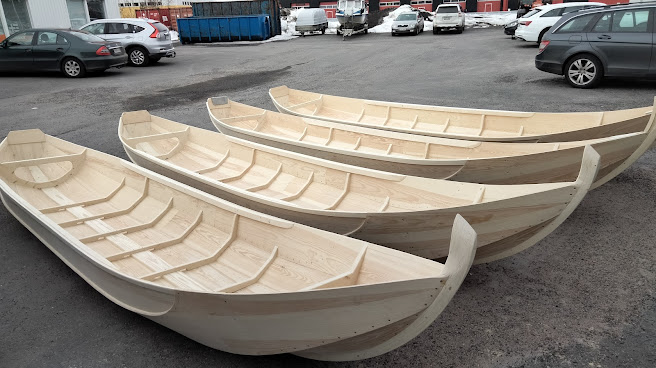 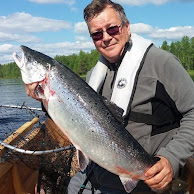 Seppo is one of our first Customers and he received his first Vendia boatplanks in January this year. Since then he has been busy, as you can see in these pictures. Not with fishing, the rivers up north are still covered with a thick layer of ice, but with building 4 riverboats that follow the old tradition of boatbuilders up north. Wood is still the best material for these boats, the different forces a boat has to endure in the rapids of the salmon rivers generate high tensions and forces to the hull. The supply with good boatbuilding wood in the north has become very difficult, so Seppo was very happy to hear that Vendia is back. Before this winter Seppo had build 5 boats, one from birch plywood and four from Vendia. Now there is four more.
This is what Seppo says about working with Vendia:

"I made my first boat from birch plywood. All the following ones are made from Vendia. Vendia became available at that time in 2016 - at least to my knowledge - so that's why I wanted to try it.

For me, the main reason was the look - the Crown Cut pattern is really pretty, and it comes out well especially on river boats where the width of the individual planks is large. On my model, which has a second board in the bow all the way to the batten (so at its widest it's a little under 400 mm), the pattern comes out nicely. Of course, the other boards are wide too - I use 300 and 325 mm boards, with the visible part of the board being 250-300 mm wide.

Another reason - and a significant one - is the thickness of the surface veneer and the neutral colour of the used glue. In the continuation joints, a thick surface veneer forgives a lot - meaning the joint is easy and secure. There is room for sanding. A birch veneer that has been made by turning and the surface veneer still sanded thin is at greater risk of surface veneer bursting. Similarly, birch marine plywood has already been glued at the factory from different veneer sheets, the seams of which will show up as a very dark (dark brown) raw veneer. They cannot be sanded out of sight.

The third reason is the absorption of the impregnant: in thick veneer, the impregnant is absorbed more deeply - than in thinly sanded birch - so I would think it would prevent rotting much better. In birch plywood, the impregnation apparently doesn't get beyond the first layer of glue, so the protection is weaker.

Vendia is probably a bit lighter than birch plywood - at least that's what the finished boat looks like.


As for workability, Vendia is easy to work with - easier than birch. Of course, the finished narrow dimension of the boards makes initial processing easier compared to a 3000x1500mm sheet of plywood. On the other hand, someone may argue that you can save on the total surface area of a large board if you can cut the necessary pieces with a small amount of labour.
Of course, the Vendia then has a limitation in width if you need it: since I haven't had a 400mm wide board with a warp pattern so far, I've had to make a long sideways strake for the bow section on all boats. This is because of my own boat model. That's how I ordered the materials now, so I made a side bridge for all but the last three boats. On the last one I tried to see if I could get the 400mm width enough, and I did - although I had to make 2 longitudinal extensions. Making a longitudinal extension is of course easier in terms of compression as you don't have to fiddle around to get the compression in the middle of the wide board with normal wooden clamps - so no need for different planks and clamping levers.

The bending and positioning on the Vendia is good. Perhaps this is highlighted by the fact that there are fewer transverse veneers - birch has almost the same amount of longitudinal and transverse, so bending may therefore be tighter.

Because of that Crown Cut pattern I've often encountered questions and admirers on the river due to the fact that the boat is made of whole boards, and such wide boards have been used. I have had to show the edge of the "plywood" to make them understand that it is a composite material. They have praised both the material and the boat as pretty - this adds to the joy of reaching the shores. It is an important part of the charm of salmon fishing.

I live in Oulu, but I'm originally from Kittilä at the foot of Levi. I'm still a country boy, and I enjoy fishing and hunting a lot - and nature is important to me anyway. Salmon fishing has brought me more into boats - in the past I was often on the river catching grayling - mainly from the shore, but having lived on the shore I have always had some kind of boat. Fibreglass - easy to maintain as it is, is just not really suitable for salmon fishing."

Here you can find Seppo`s own photo gallery that gives you a good insight into his boatbuilding process. You can also follow Seppo on his facebook account. 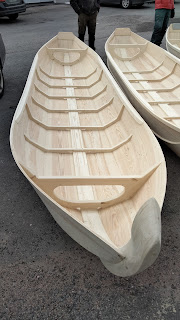